Give us your ideas to make THUG Pro even better.
Post Reply
18 posts

These are just some suggestions from me:


- Bring back skater voices.
Or at least have the ability to toggle them on or off.

- Bring back the playlist for the music.
I use custom music in THUGPRO and it's a pain to constantly press "skip track" every time when I want to listen to a specific song. Also, it would be nice if the ability to listen to the music in the sound options menu was brought back. (If the playlist won't be brought back, then this would make the spamming of the "skip track" button a bit more convenient.) Also maybe increase the song limit?

- The ability to scale clothes on the skater.
Like shirts, pants, misc. items, etc. This would help out big time with people like me who use secret skater models and the clothes look weird/too small on them.

- Vehicle Menu (Offline only?)
I know that many other people have requested this and I don't think it would be a bad idea either if the vehicle menu from Anteara Mod (or something similar to it) was in THUGPRO. Also, add some other kind of vehicles that weren't on the Anteara Mod menu like the gurney or the shopping cart. If there are problems making this work online, then just make it work on offline freeskate only.

- Bring back the THUG2 level destructions. (Offline only?)
Like releasing the bull in Barcelona or firing the cannons in Boston.

- More info about the level editor & model conversion tools?
Or if they're ever gonna be released?

And the last most important request:

Keep up the good work of making this mod awesome!

And that's exactly the reason why I crossed that suggestion out.
I think that this would be a good idea if it weren't for some people being messed up and wanting to use images like that online.
Twitter: https://twitter.com/Bailey1014_1
Youtube: https://www.youtube.com/c/Bailey1014
Steam: http://steamcommunity.com/id/Bailey1014

As for some of your other suggestions.
1: Id say a voice system would be nice to implement, however, I'd remain keeping THUG Pro on mute. So voices. What did they add to the game?
2: ...
3: A lot of that has to do with too many pieces and some of the hackery involved in allowing the cool features.
4: Not sure I understand the issue. Are their body parts coming through the clothing? If so perhaps setting torso/legs to none before applying the part.
5: I believe this was being worked on. Perhaps even some race goals? I might've dreamt that.
6: Features are features. They'd be abused online why not have some for offline. Offline isn't the priority, but I see where you're going with this.
7. Offline?
8. Yes, level lights. Night mode isn't night mode without it.
9. If memory serves me correctly there were issues with weather in thug2 it wasn't exactly like thug1's system.
10. The tools can pick cyborgs out of a crowd and they make a mean cup of coffee.
Top

4: Not sure I understand the issue. Are their body parts coming through the clothing? If so perhaps setting torso/legs to none before applying the part.

This is the problem: 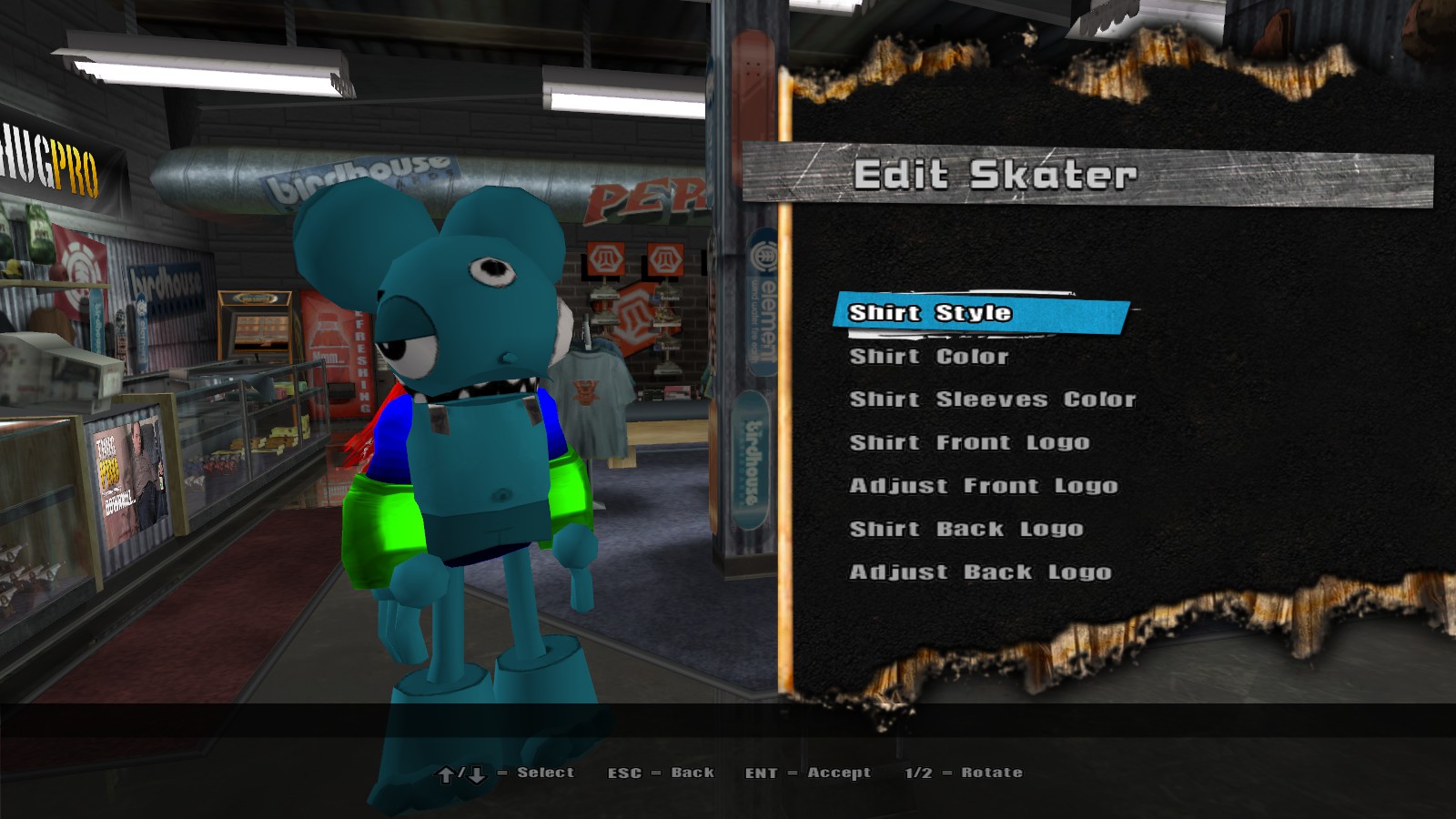 The shirt sleeves are the only thing that can be seen. The middle of the shirt is there but it's inside of the torso.

Also, things like the pumpkin head, Octodad head or ped heads are extremely small to the point where it's inside of the head. 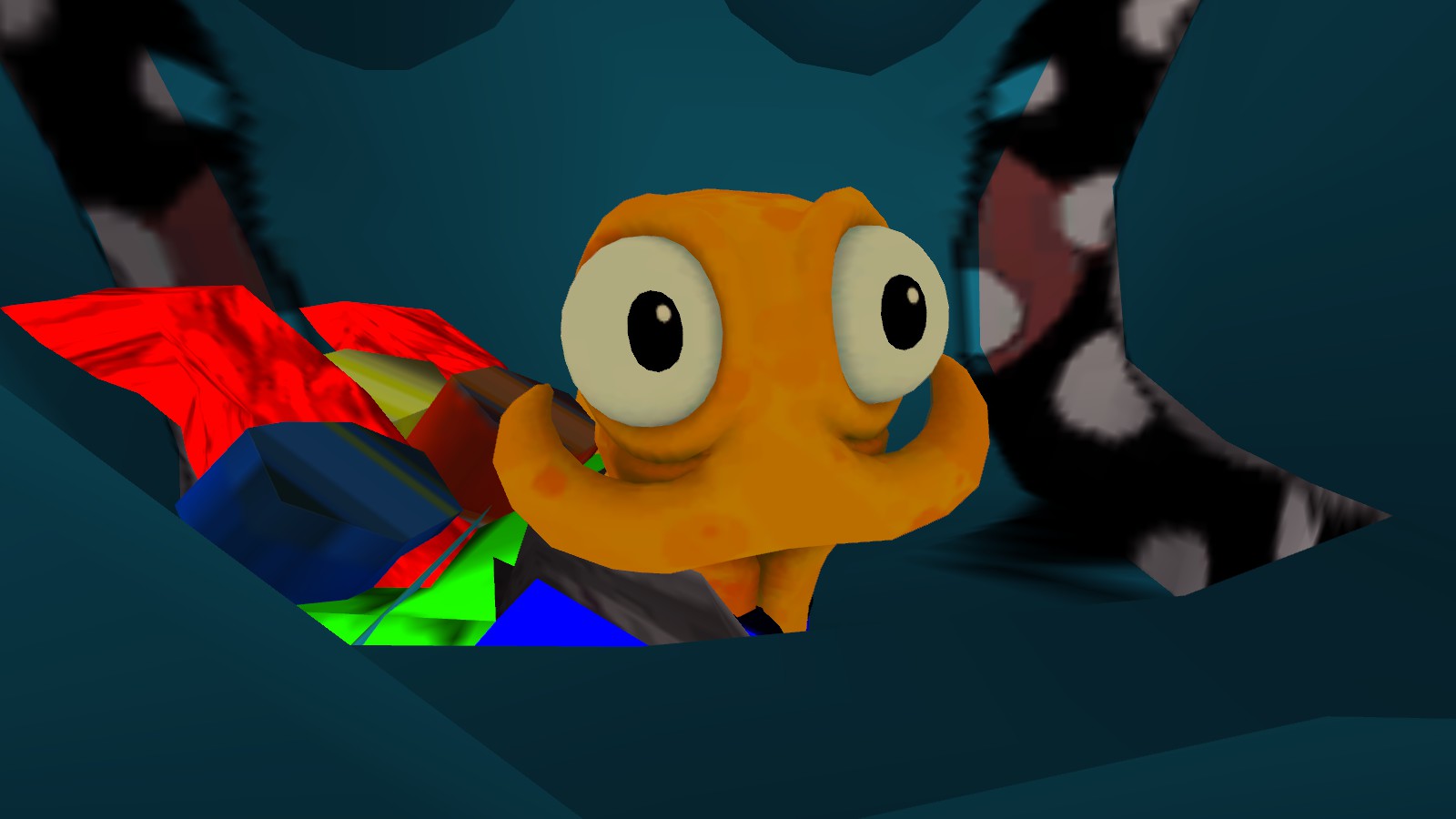 I think it's because the game doesn't hide the individual parts on these models. 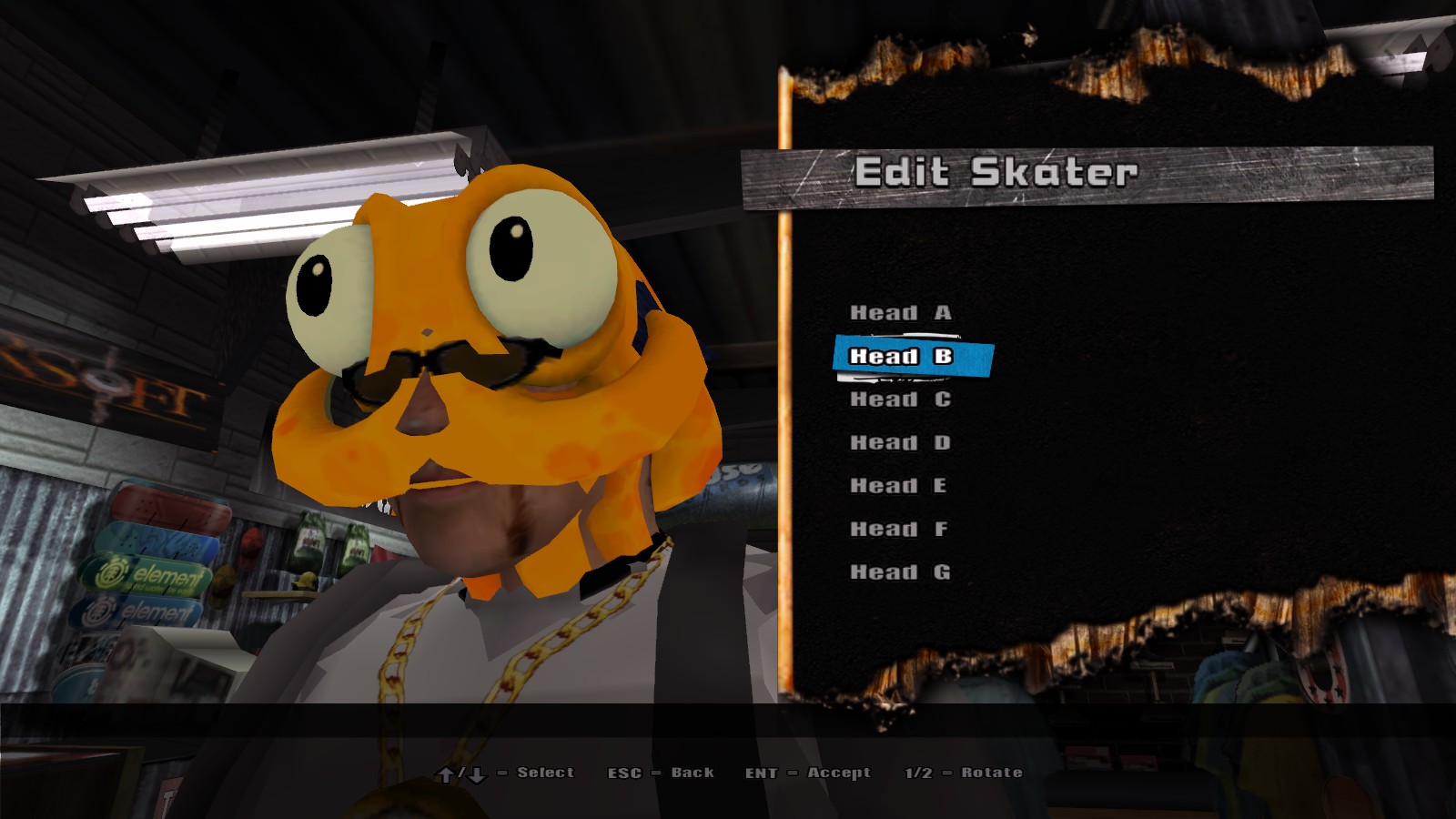 7: ...
I see it being possible online, but some other concerns may arise. Like someone playing not wanting the objects destruction to be broadcast.
Then if no broadcasting then what advantages or disadvantages would this cause based on the destruction.

4. Okay I see in the context of that first cas removing torso or legs would just leave you with a mascot head. Single object scaling should be possible but then there are some other issues such as who decides what gets its own scale option. Maybe those specific heads could be scaled up a bit. I don't know.
Top

I know there are already responses to those ideas, But I'm still chipping in my opinion.

1. You can still select skater voices, But you just can't hear them when you bail like in THUG2. But I don't really care.
2. This would be fine. But I don't need it since I've replaced the songs I don't like with new ones. Although increasing the maximum file limit would be nice.
3. I'm sure the CAP crashes are due to memory limitations, I don't think it can be completely fixed, Correct me if I'm wrong.
4. Would be nice to have so I can put different clothes on Pro Skater models. (THEMOD 1.3 Anyone?)
6. THUGpro devs said those crazy features you've mentioned will never return.
7. Might be possible. But the cutscene code was removed which was part of why this doesn't work, But I suppose they can be re-written to work like it does in the THPS3 Levels.
10. I've been wondering about this too. Once the *.dae to *.mdl.xbx converter is out, I'll be porting some models I made myself along with models from other games to THUGpro. What I'd also like to have is the THPS3 Level Converters so I can port some custom maps I made with BSP Patcher.

4. For normal body types just set the underlying part to none.
7. Those level events aren't related to cutscenes.
11. And can only be applied to a face.
Top

4. For normal body types just set the underlying part to none.

How would that be possible on the Space Monkey skater that I use?
Twitter: https://twitter.com/Bailey1014_1
Youtube: https://www.youtube.com/c/Bailey1014
Steam: http://steamcommunity.com/id/Bailey1014